Disputes between neighbors are not uncommon. There are countless horror stories on social media showing mean neighbors and their antics everywhere, and it’s not just limited to Singapore.

In a viral TikTok video posted last Monday (July 18) by user Bundlekitaa_, an angry man could be heard screaming as he pointed the camera at a pile of trash on the driver’s seat of his red Honda car in a Kuala Lumpur condo.

This man, presumably the owner of the car, claimed he had parked in the wrong place by mistake and had already paid a fine when his car was blocked, but later discovered rubbish in his car which was thrown by his angry neighbor who owned the parking space.

The video begins with the Honda car owner swearing, “You turn on the CCTV now. C*** you put trash in my car, you son of a pig! Did you think that car was bought on the cheap?”

“Am I not being nice to you? Be reasonable, I just parked here by mistake. Be a little reasonable, it sucks, stupid,” the man continues as his wife is heard repeatedly asking security guards to call the owner of the parking lot downstairs and talk about filing a police report.

In the video, used food containers, dried leaves and plastic bags could be seen inside the car.

In the caption, the man mentions that the car was left to him by his late father: “What kind of fate must I have to have a neighbor with a mean heart who does this to someone’s car. Be patient, my heart… The car left by my late father…”

The TikTok video has since garnered 3.5 million views and 185,600 likes at the time of writing.

The woman also took to Instagram to explain the situation, posting a photo of the trash can in the car, a filed police report and the vehicle believed to belong to the neighbor.

“Our car was parked wrong, then got stuck, then we paid the price. But it turns out that the owner of this parking lot has the attitude of a dog, he opened the car door and threw rubbish containing excrement [sic]read the edited caption on the photo.

“If your attitude is that of those who live in the forest, do not move to a fancy place like this, it does not suit you. We, the residents here, do not behave like garbage like you. Is- this the first time you’ve been living in a condo?”

It is unclear whether the police report was filed by the man or his wife, but the end of the report indicates that the victim had done so out of fear for his safety and that of his property. 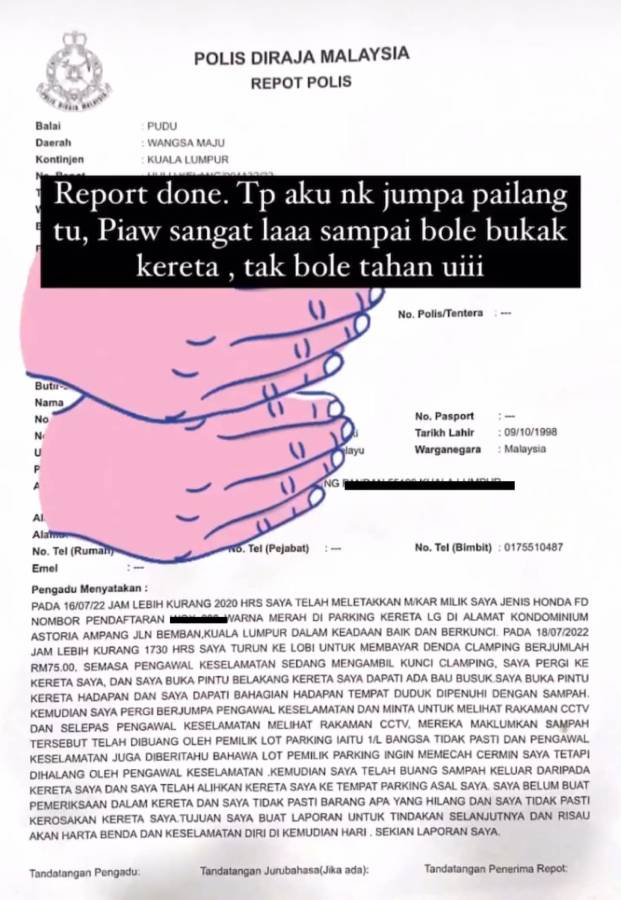 A day later, on July 19, the man revealed a note allegedly left on his car by the neighbor. 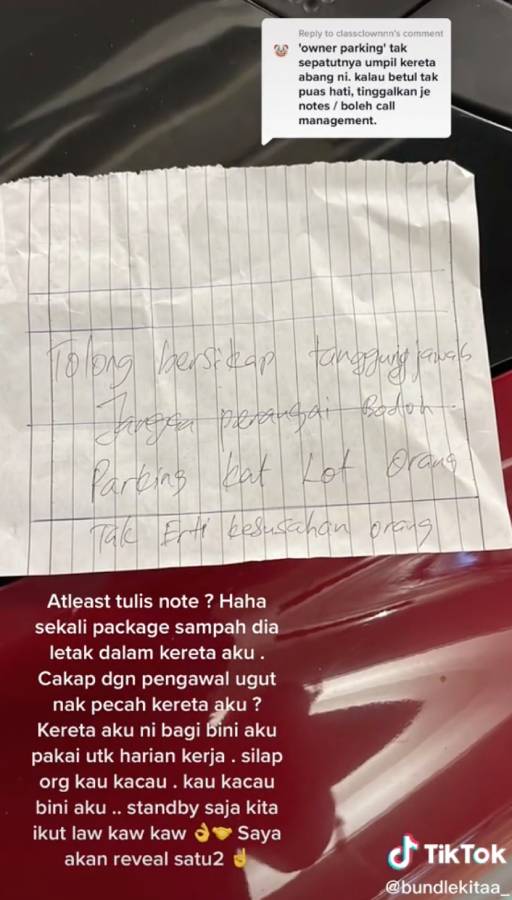 The TikTok user added that the neighbor wanted to “break his car”.

Although there were comments supporting the couple, some netizens on Facebook and TikTok believed the couple were to blame for the incident.

“Going into someone’s parking spot and then blaming the person and getting mad at them. That’s funny,” one netizen said.

Another netizen found it amusing that the couple wanted to find the neighbor’s contact details using social media since they lived in the same condo, suggesting they were waiting outside the neighbor’s car instead.

A user on TikTok pointed out how the police report said the man parked his car in the parking spot on July 16 and didn’t want to get his car out until the 18th.

“What were you doing during those two days? asked the internet user.

Earlier in May, a woman in Singapore crashed into a Marina Bay Sands car park to book it and threatened a driver who reversed into the space with a police report.