According to the term sheet, YGT will initially hold a 70% stake in the joint venture, which will be injected with ChargeEV, which is 100% owned by GTMA. ChargEV has over 400 charging stations nationwide and dominates this segment, as other operators – ParkEasy, JomCharge and ChargeN ‘Go – have only deployed 60 stations so far.

ChargeEV charges its 9,850 RM240 members per year for unlimited recharging. Although no financial details were disclosed, we expect ChargeEV to be in deficit given an estimated annual revenue of RM2.4 million based on the current payment structure.

Assuming procurement and installation costs of RM 30,000 per unit, we estimate that Yinson’s investment could be less than RM 10 million, or 0.2% of the group’s market capitalization. Assuming an interest charge of 5%, we estimate a minimum profit reduction of RM 1 million to RM 2 million, which is 0.4% of FY22 EPS.

Management expects the government to put in place more incentives to encourage the adoption of electric vehicles, in line with the country’s green agenda. This could increase the number of fully battery-powered electric vehicles by 200 and plug-in hybrids by 52,000 currently. With new payment schemes, this should allow ChargeEV to become profitable.

Despite the slight immediate erosion of profits, we are neutral on this development which reaffirms the group’s net zero carbon ambitions, which have led to investments of up to RM 60 million in green technologies, in addition to its solar projects of 330 MW in India. This justifies our 4-star ESG rating for the group, which still derives most of its income from the oil and gas sector.

The stock is currently trading at an FY23F PE windfall of 14x its five-year average of 21x for a globally recognized FPSO player with a healthy balance sheet and strong prospects for substantial expansion of its ongoing order book already formidable 40 billion RM, which translates into a robust turnover of 13 times FY22F. 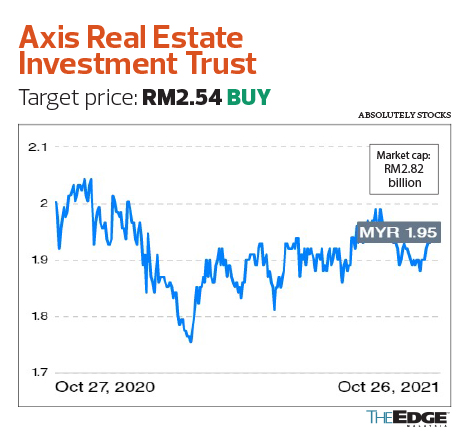 HONG LEONG INVESTMENT BANK RESEARCH (OCT 26): Axis REIT has offered to acquire a property from Venice Tulip Sdn Bhd for RM32 million. The property is identified as PLO 78, located in Kawasan Perindustrian Pasir Gudang, Johor. It includes a one-story warehouse block with a mezzanine and three one-story warehouse blocks. The total leasable area is 276,000 square feet. The proposed acquisition will be funded by an existing credit facility and is expected to be completed by 1HFY22. The property is currently 100% occupied by Venice Tulip. The lease term is for a fixed period of three years, with a monthly rent of RM261,000.

We are positive about the acquisition as it is accretive as the return on net property income (NPI) is 9.6% compared to its current NPI return of 7.6%. With the new asset, Axis REIT’s profits for fiscal years 22-23 will improve by approximately 1%.

The purchase price is RM116 psf, which is very reasonable for industrial space in Pasir Gudang and also below the market value of RM35 million based on the appraisal made by the independent expert . CGS-CIMB RESEARCH (OCT 27): IGB REIT’s 9MFY21 results represent 70% of our annual forecast and consensus. We believe performance is broadly in line as we expect robust quarter-on-quarter profit growth in 4QFY21F, supported by: 1) an easing of rental support and 2) a strong recovery in parking lot revenues – benefiting from the reopening economic development under the National Recovery Plan (PNR) Phase 4 and the lifting of the ban on travel between states.

3TFY21 revenue fell 27% yoy, but increased 13% qoq, as rental support gradually eased in September, from its peak in June to July. The net margin on real estate income of 9MFY21 slipped 5.6 percentage points year-on-year to 65%, but is on track to improve at 4QFY21F. We believe Mid Valley Megamall and The Gardens Mall (TGM) have managed to maintain healthy occupancy rates of over 90%, while average weekend attendance since late September has improved 80% to 85%. % from pre-Covid-19 levels, especially since NRP Phase 3 began on October 1.

The outlook improves towards the end of 2021 and the group is cautiously optimistic about a recovery in retail space and consumer spending in 4QFY21F. The risks of rental support will gradually decrease in the coming months and priority will also be given to tenants of TGM’s luxury space. However, the outlook for rent reversion remains in negative territory (single digits) in fiscal year 21F for the two shopping centers. 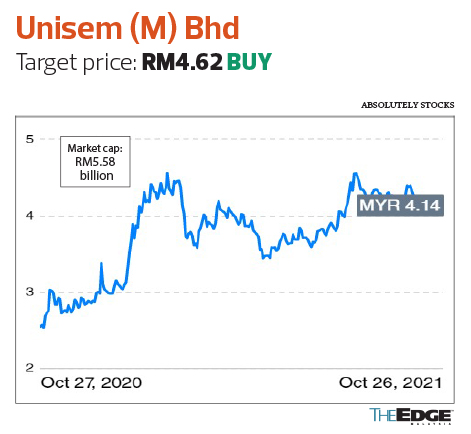 RHB RESEARCH (OCT 27): Base revenue and profit for 9M21 of RM 1.1 billion and RM 142.2 million respectively were broadly in line with expectations at 67.6% and 66.1% of our annual forecast and consensus, given the stronger 4T. Overall, the 23.8% revenue growth in the current year was driven by higher sales volumes and better average selling prices under favorable market conditions, while the profit increased more significantly, due to operating leverage and higher net interest income. A second interim dividend of two sen per share has been declared.

Management expects sequentially stronger results going forward, as operations returned to normal in October following the full vaccination of all employees. Sustained strong demand for all products is likely to continue over the next two to three quarters, given the current chip shortage.

Phase 3 expansion of its Chengdu plant is progressing as planned and is expected to be completed by the end of 2022. Total capital expenditure incurred during 3QFY21 was R134 million for additional capacity in its facilities in Chengdu and Ipoh, while its workforce fell slightly to 6,078 from 6,148 employees due to the non-renewal of some foreign operators.

We believe that Unisem will resume its growth momentum in the coming quarters, following broadly robust demand and favorable factors observed in the semiconductor sector.