Kota Kinabalu: In the early hours of a beautiful morning in mid-1982, Bacho Pilong, then 17, awoke from the little sleep he had had, overwhelmed with a sense of anticipation of what the day might bring. to bring. He was about to embark on a long journey from his remote hometown on the island of Sebatik, on the east coast of Sabah, to Austin, Texas, United States, to pursue studies in engineering. chemicals under the PETRONAS educational sponsorship program. From Sebatik, he took a two-hour boat ride to Tawau and flew to Kota Kinabalu en route to Kuala Lumpur where he stayed, with a group of sponsored students, for a month before continuing the trip to Austin.

“I wondered where Texas was; at that time, there was no reference to Google,” said Bacho, now senior vice president of project delivery and technology (PD&T) at PETRONAS and a member of the executive team at PETRONAS. “But I was excited. It was my first time venturing out of Sabah, and my first time flying. Flying was such a privilege then,” he said. unbeknownst to young Bacho, his departure from the island where he was born and raised also marked the start of a journey that would later lead him to an extraordinary career, spanning 30 years and counting, to PETRONAS.
Struggling with the English language
His immediate challenge upon arriving in Austin in the summer of 1982 was to struggle with the English language, the one subject he didn’t master too well in SPM. “The first thing they did was give me a placement test to assess my skills. For this test, the lowest score was level 1 and the highest was level 5. Malaysian students normally reached level 4. But when the result came I was at level 2. I had to do – I had to bounce back,” he said, adding that he got better by reading storybooks. His score eventually climbed to Level 4 within a semester. Bacho has adapted well to life in a foreign country, while remaining rooted in his Sebatik upbringing. Adaptability has proven to be his strength, an attribute that will develop as he progresses in his career at PETRONAS.
struggling with unemployment
Another challenge awaited Bacho when he graduated from the University of Texas in 1987 – Malaysia was facing an economic downturn and he found himself jobless upon his return. He remembered having to decide – stay idle or do something. Thus, for a few years, he moved from one temporary job to another, notably in the rubber industry and in an oil palm plantation. When asked how he would draw a parallel with his situation at that time and the challenges facing young people today, studying or graduating in difficult times, Bacho said it was important not to give up. “Imagine you graduate after studying hard for a degree and suddenly you have no job; what happens to emotions, it’s going to sink, right? But if I can say one thing, it’s this – never give up, keep hope alive.
The intrepid explorer
This hope came true for Bacho in April 1992 when he received a call from PETRONAS to join the company as a process engineer at PETRONAS Carigali Sdn Bhd (PCSB) Sabah Operations. PETRONAS was then in partnership with another oil and gas company in the Samarang field, off Sabah. He then moved to Miri, Sarawak to work on transferring the field to PETRONAS. “When I started, there was no structured training. I was basically thrown into the field. The learning curve was quick and abrupt. Although we had a senior officer who coached us, it It was a lot to learn on the job… we learned, made mistakes and recovered quickly,” he said. His sense of leadership did not go unnoticed. After six years of work, he was posted to Vietnam to lead the offshore operations of the Ruby field, PETRONAS’ first overseas venture.He returned to Malaysia in 2004 to lead the operations of PCSB Sarawak before seeing another international assignment, this time on the African continent as chairman of a joint operating company in the Republic of Sudan, then in South Sudan.

Other leadership feathers in his cap include appointment as Vice President of International Assets and Senior Managing Director of Malaysia Petroleum Management – ​​the exploration and production regulatory arm that operates under the PETRONAS Group. Prior to being named Senior Vice President of Project Delivery and Technology of PETRONAS in August 2021, Bacho was Vice President of Malaysia Assets as well as Managing Director of PCSB, in June and August 2019, respectively. Over the years, he has traveled the world on corporate assignments, in a whirlwind career that has earned him the title of “Intrepid Explorer”.
Pointers to young talents
For young talents who aspire to advance in their career, they must be ready to leave their comfort zone. “If the path to your dreams seems like a huge leap forward, take one small step; you have to take that first small step. “For me, the first step I took was leaving Sabah. Maybe I’m lucky with the scholarship, but within the company I took many first steps, like moving to Miri, a short flight from Kota Kinabalu,” he added. The small move he made has broadened his outlook and opened doors for many more trips. “Through these small steps, more people will get to know you and your abilities, you will also be able to build your track record and, in turn, be given more challenging and meaningful roles…this is how you grow.This is the process; there is no simpler way than that,” he said. It was also important for young talents to have multiple skills and take initiative to explore their full potential. “Never limit yourself how far you can progress.”
Leaders train leaders
On the other hand, Bacho said, those in leadership positions should have genuine concern for people and create pathways “so that your subordinates, the people around you, can move as fast as they can. can”. “We call it ‘leaders build leaders’. When I was in Miri, one of the first things I did was ask approximately how many years people had served in the same place. Some of them had been working there for 10 years and I offered to move them so that they could still progress,” he added.
Sekolah dewasa – Bacho’s kindergarten
Recounting his life’s journey, Bacho explained how his parents instilled in him a sense of responsibility and accountability, such as taking him and his siblings to work their land, clear the jungle, plant crops and dig wells for water. “Despite the lack of formal education, they placed great importance on schooling, academic success, which I did. I was always in the Top 3 of my class. “One of the greatest gifts what I did to my parents was the end of the year when the exam results came out… the joy of coming back with a report card to show your parents, that was something to remember,” said Bacho also recalled that he often followed his father to attend a sekolah dewasa – an adult learning class – long before he started Primary 1. “I liked taking these classes. . It was a basic learning of alphabets and numbers. Somehow, while my father was learning, I was also catching up. This sekolah dewasa was basically my kindergarten,” he said.

He stressed the importance of education and urged young people to take an interest in science and mathematics. “I hope that the younger generation, wherever they come from – villages, islands, etc. – don’t be afraid of math and science. “These are subjects that anyone can be good at if you really dive deep into them,” said Bacho, who was placed in a science stream class when he moved to a boarding school in Tawau after reaching form 4.
Create a network, talk to people
Bacho also spoke about the importance of building networks, especially among the younger generation growing up in the age of the internet, as part of their development process. “Virtual interaction just isn’t enough. You have to have that physical human interaction. I would encourage young talent to go to conferences, meet industry leaders and connect. Reach out to people experience and be inspired by them. He also urged young talents in the company to help and reach out to inspire others. “For example, go and speak in schools. You don’t need to wait until you are in a leadership position to do so,” said Bacho, who visits schools in Sabah to inspire students.
Leadership
On what shaped his leadership, Bacho said: “It goes back to the pioneering spirit, it’s in my DNA. All these places where I was assigned gave me different learnings and ideas. When it comes to leadership, I don’t believe that one style fits all circumstances. “For example, in South Sudan, when we were going through a difficult period, it required authoritarian leadership. In Kuala Lumpur, working with young talent requires a different kind of leadership…you have to be vigilant and careful about what style of leadership suits the circumstances,” he added. In the era of the COVID-19 pandemic and under movement control orders, this called for quick decision making. “This is where your experience comes in handy to guide you. The key word is flexibility – your ability to adapt to changing circumstances and show leadership,” he said.
In reflection
When asked how he would sum up his life’s journey from humble beginnings at Sebatik to taking on a leadership position at PETRONAS, Bacho said, “PETRONAS is a merit-based organization. For me, and my observation on reaching this level, anyone can progress to a leadership position if you demonstrate experience and embrace the shared values ​​of the organization. “It’s not where you start that counts,” he said, “it’s where you end.” “Don’t make your starting point an excuse that you can’t go far because that’s where you started…don’t let the circumstances from where you start dictate where you end up.” 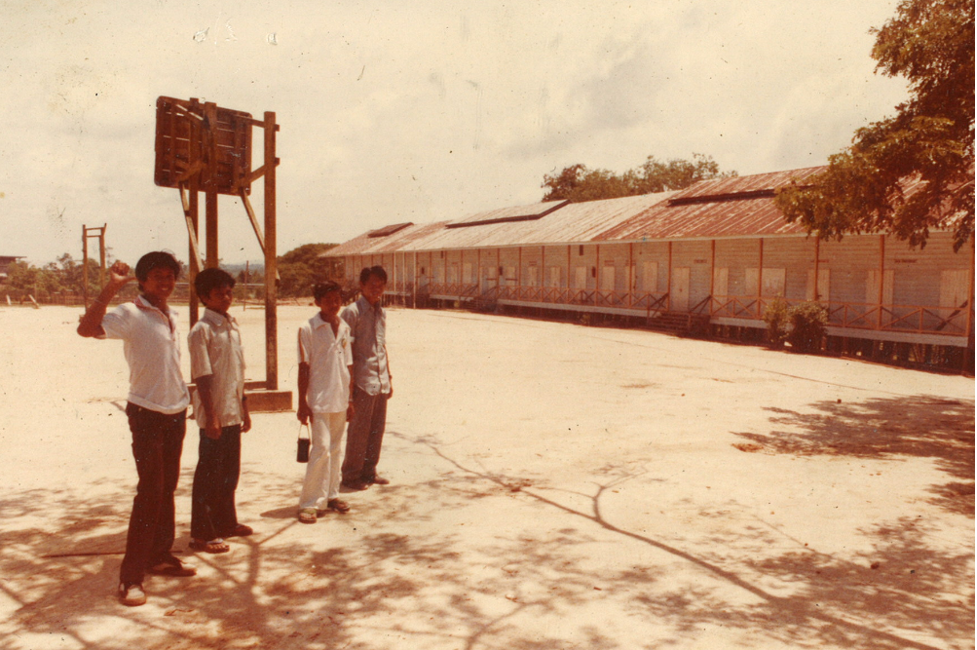 Bacho (second from left) with his classmates at SMK Wallace Bay, Pulau Sebatik 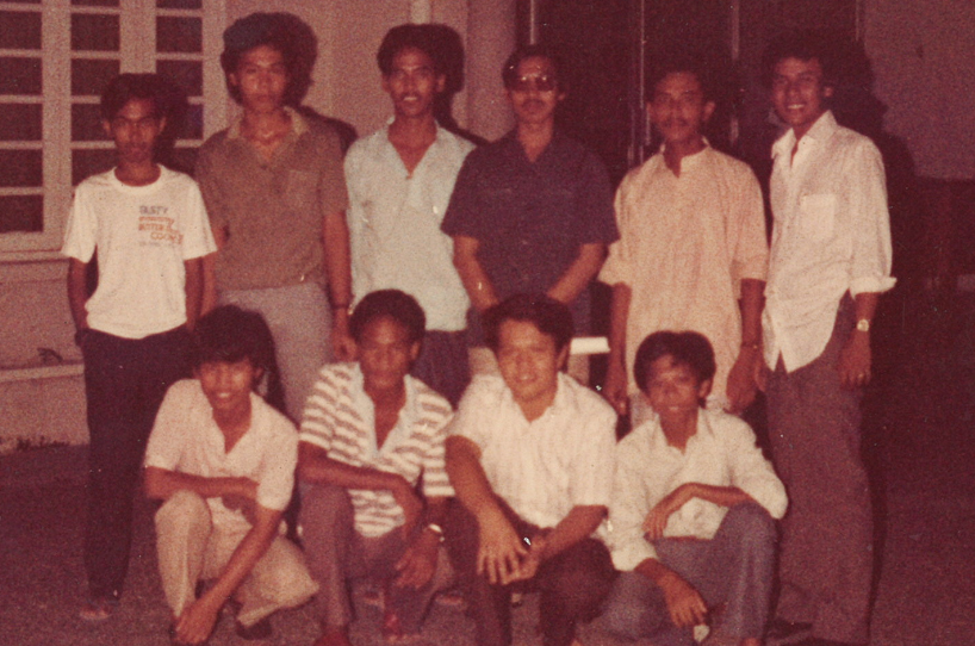 With other PETRONAS fellows from Sabah and Sarawak before leaving for the United States (front row, first from right) 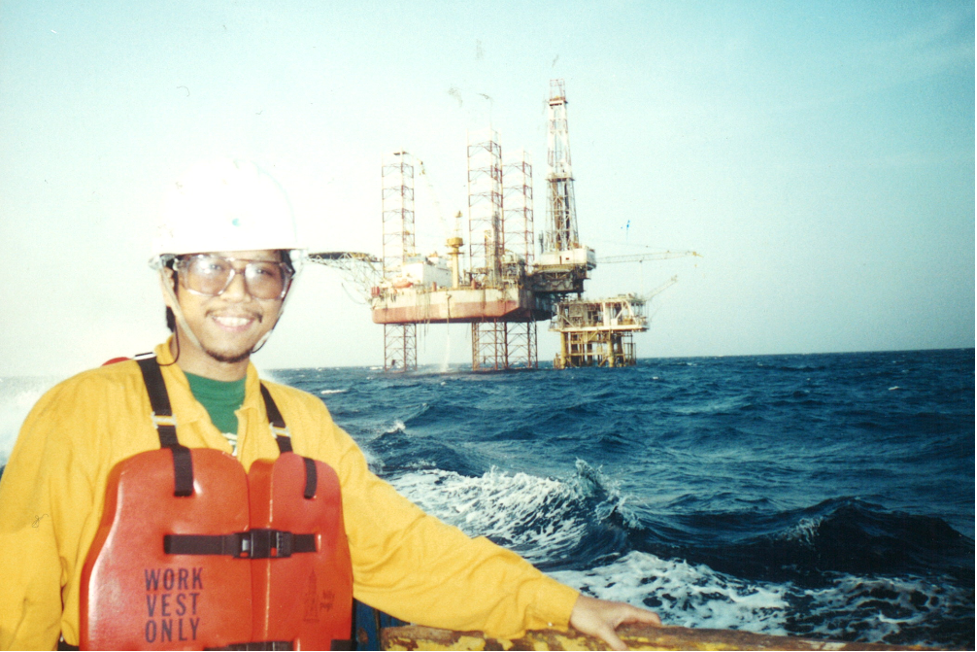 Aboard a supply ship while in Vietnam 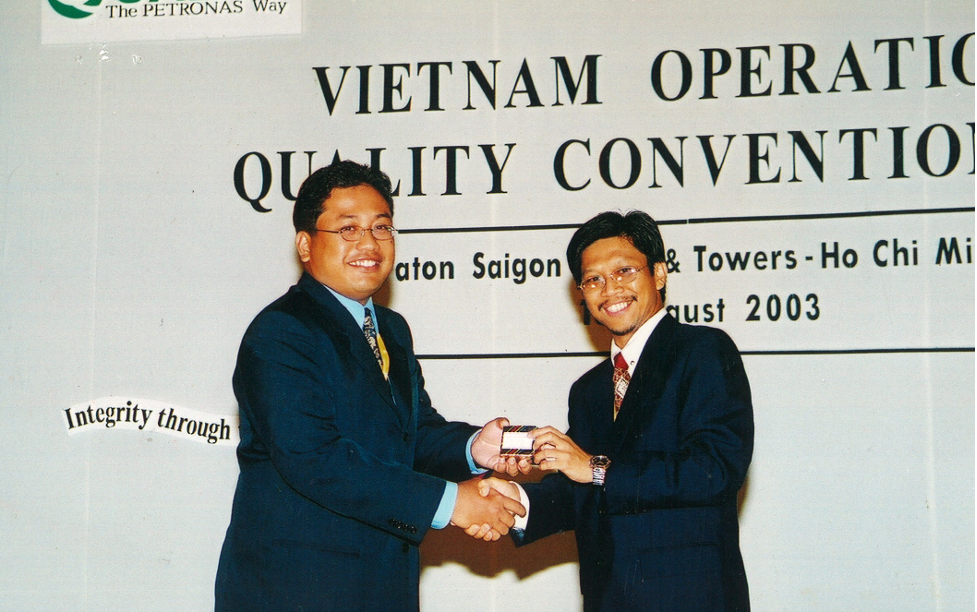 At a conference in Ho Chi Minh City, Vietnam in 2003

Bacho (center, in jacket) with personnel from the Sudd Petroleum Operating Company during his assignment in South Suda 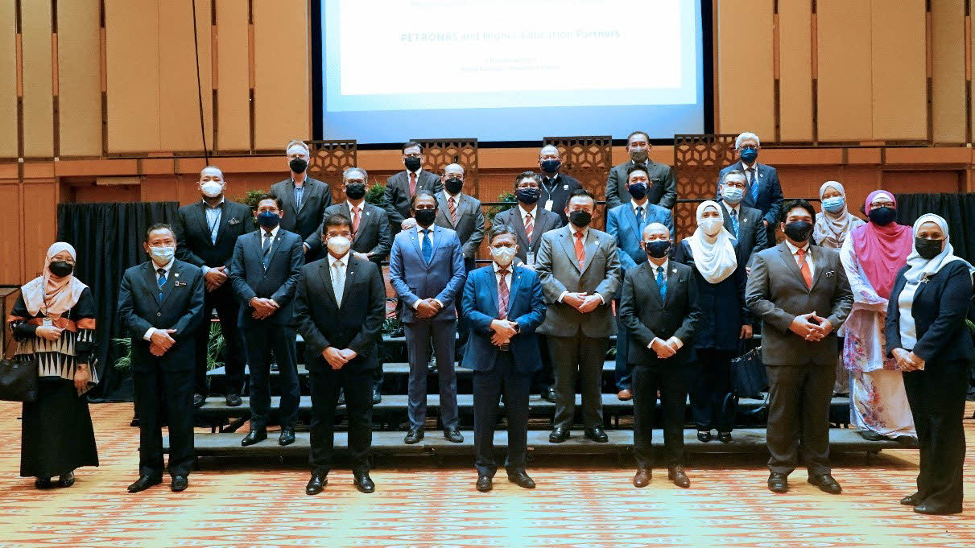 Bacho (front row, fourth from left) with 15 local university leaders after the signing of Memoranda of Understanding in November 2021 between PETRONAS and universities, including Universiti Malaysia Sabah, to catalyze industry knowledge sharing- university in technical fields